Is This the Dawning of the Age of A Cappella? 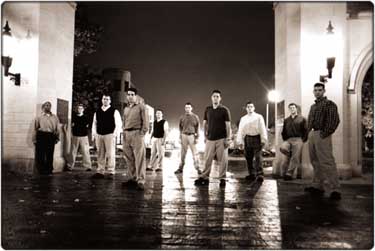 Yesterday, The New York Times featured a story about the founding members of the University of Indiana’s all-male a cappella group, Straight No Chaser. The group, composed of ten men, most of whom are in their early 30s, recently scored a five album record deal on Atlantic’s Atco imprint based on the success of a YouTube video, posted last December, of them singing “The 12 Days of Christmas” back in 1998.

As a former college student (and, yes, former member of an a cappella group myself), this news came as an overwhelming shock.  Yes, a cappella is a prominent part of the performing arts scene on a host of college campuses across the nation (there are more than 1,200 college groups nationwide, according to the Times), and yes, many a cappella groups may even be regarded as “cool” on some of the aforementioned campuses, but a major label record deal? Preposterous!  As I can tell you first hand, while you might be inclined to mention your beat-boxing skills during a conversation with a sorority girl at the Keg of Evanston in the midst of your ruddy-cheeked undergraduate years, you don’t talk about it once you get your diploma. No one outside the world of midterms, date parties, and refilling your student ID with Munch Money points wants to hear about your pitch pipe-blowing prowess.  A Cappella, in a post-collegiate universe, is decidedly lame-ass.

That said, it was all the more astonishing to me that Atlantic decided to invest in these dudes, most of whom haven’t been college students for over a decade. Craig Kallman, the chief Atlantic executive who “discovered” the group, envisions Straight No Chaser finding their niche alongside such light fare as Josh Groban, Manheim Steamroller, and novelty holiday acts like the Trans-Siberian Orchestra (famous for their big-nutted heavy metal reimagining of “Carol of the Bells”).  I mean, maaaybe. But even if Straight No Chaser scores fleeting success as a slightly gayer version of Manhattan Transfer, are they capable of sustaining five albums worth of crowd-pleasing vocal stylings?

Probably not.  The fact is, there’s a reason why a cappella has yet to break out of the realm of student center basements and dormitory common rooms.  As a genre, a cappella is cheeky, ironic, heavy-handed, and self-conscious.  Sort of like most college students.  It’s also, and I resisted the urge to say this, but ultimately gave in to the part of me that thinks most eighties pop hits sound better when performed by the 1999 Dartmouth Aires, potentially really incredible to listen to when expertly arranged and performed by talented singers.  Even so, what seems transcendent at a Parents’ Weekend show in Tech Auditorium isn’t necessarily going to fly with the American public at large.  Add to the equation the fact that the members of Straight No Chaser are essentially old enough to have fathered today’s college students, and the whole thing doesn’t exactly sound like a surefire recipe for success.

I mean, don’t get me wrong, with the economy being the only thing failing worse than the music industry at the moment, I can see where Craig Kallman is coming from.  Try out some all-male a cappella, see how it goes.  The worst thing that happens is that Atlantic continues to sell no records.  And with a budget of only $200,000 (which is very low by major label standards, but fantastically extravagant to anybody who’s ever tracked mezzo-sopranos singing “Since U Been Gone” in Freddie Feldman’s basement), the label’s hardly taking an economic gamble.  It’s just like, come on man, if you’re going to tap college a cappella for a major label release, don’t put all your eggs in a ten-year-old-novelty-YouTube-video-shaped basket.  Craig Kallman has obviously never seen legit college a cappella if he is so moved by annoying physics majors weaving “Africa” into a Christmas carol.  That shit’s old hat, dawg.  If you’re trying to put out a cappella that has any potential to be cool to anybody, you’ve gotta appeal to the people who like it in the first place: college kids.  That said, why not pick one of the best current groups in the nation, and spend two hundred grand on them?  Give me a major-label, polished, glossy release from the SoCal Vocals, or Off the Beat, or the Beelzebubs. Or Purple Haze. That shit would be siiiick. And so what if the group changes every year when members graduate?  Market that shit right, and you’ve got yourself the next Menudo.

The other problem with collegiate a cappella is that it’s primarily composed of covers—half the fun of going to a cappella shows is seeing how groups are able to recreate your favorite tunes, using only their mouths! While this is indeed really awesome, the integrity of such an art form would likely not hold up if treated as an actual, nationwide release.  Would a cappella cover versions of slightly older hit singles begin taking over the airwaves?  Would already-established artists release a cappella b-sides to keep up with the burgeoning trend of instrument-less music?  Would a cappella groups find minor, but not insignificant pseudo-pop stardom along the lines of groups like O-Town, Dream Street, and BBMak?

Nah.  It’s just too dorky, and Straight No Chaser’s thirty-something chic is not likely to improve that perception.  Still, I will say this: it is possible, in the years ahead, and if more dudes like Craig Kallman are willing to put a cappella in a major label spotlight, for a highly-talented, innovative songwriter who uses a cappella as his/her medium to rise to some sort of well-respected prominence.  Remember a little Imogen Heap ditty called “Hide and Seek”?  All a cappella, baby.  What about the intro to “Diamonds on the Souls of Her Shoes”?  No, there isn’t even a stray djembe in there.  The point is, while a cappella does indeed have potential, there has yet to be a significant contribution to the world of pop music that would elevate the genre above the something-you-hide-about-your-past-when-trying-to-seem-hip level.  And while Straight No Chaser is not likely to change that with their upcoming disc, “Holiday Spirits,” don’t be surprised if all of a sudden some all-vocal jam from four kids in Bedstuy becomes the sleeper hit of summer 2012.  Right before the apocalypse.

This entry was posted on Monday, October 6th, 2008 at 11:53 pm and is filed under Uncategorized. You can follow any responses to this entry through the RSS 2.0 feed. You can leave a response, or trackback from your own site.

11 Responses to Is This the Dawning of the Age of A Cappella?