Put Your Hands Up For Detroit

What will it take for someone to fix Detroit?  No, I don’t mean fix like when you fix your cat; I don’t mean just cut it off and end it now in the Oliver Wendell Holmes Jr. Buck v. Bell “Three generations of imbeciles is enough” sense.

A digression into the merits of negative eugenics is not the topic au courant, as we say, having been proved inhumane far before Justice Holmes so eloquently stated its case in the majority opinion those 81 years ago.  More timely is the discussion about the filthy quagmire of negative publicity and humiliating events that has mucked up the good name of the still proud city of Detroit.  What further well-documented indignities must shame the Motor City and its citizens before someone steps up and starts fixing some problems?

A colleague of mine who often pontificates frantically and angrily about the merits of Midwest-based media outlets recently pointed my attention to one Charlie LeDuff, the aggressive reporter for the Detroit Free Press.  His tip encouraged me to undertake a lengthy online perusal of the paper, which I had never read before.  Impressed by the Freep’s variety of local stories, I reflected non-chronologically upon what I, not a Detroiter, had heard about the city recently: END_OF_DOCUMENT_TOKEN_TO_BE_REPLACED

Yo Dee/Mp3-Jay: How To Pop Champagne on New Years Like Ron Browz

This New Years Eve, while you’re yelling at the Dee/Mp3-Jay (or your digital radio toggle because you’re home alone drinking red wine from the bottle and chain smoking because you anxious) trying to get your jam played you will know instantly whether your party’s tunes are in the right or wrong hands with one look and a few words from said Dee/Mp3-Jay.

You will ask for Beyonce and your Dee/Mp3-Jay should say:

“I got that Browz comin.”

“No back up I got that Browz comin.”

If you hear anything else, drop the complimentary champagne (wait you already did), gather some females, and walk your ass to the nearest velvet rope.  Show em, flash a couple of dollars and tell em “Ten rosès and a few cold waters.”

Tell em that.  Here’s how to do New Years this year: 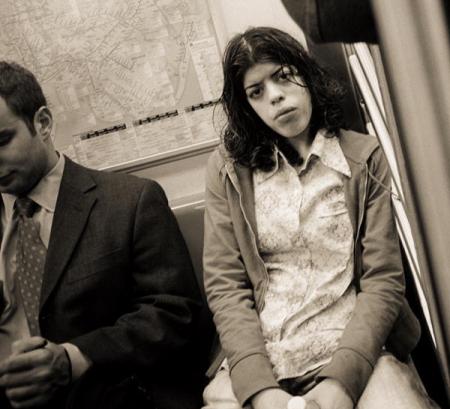 OK so we’re all trickling back to our respective metropolises stuffed with fancy new gadgets, gift cards blazing, little thick round the middle like your man likes it but you uncomfortable about, ready to experience the city anew.  Bags packed all organized.  Lists in the moleskins, iPhones synced, New Years Resolutions lists already in the second edit.  And gazing out the windows of cabs from JFK and buses from Chinatown, we feel poetic, too.  Leaving home, forging home.  Through the glass the world lays large and our hearts gape to let it in.  Playing tunes from back in the day in the earbuds, scribbling notes, thinking about love, thinking about fathers and mothers and adventures yet to come.  Feeling fresh in your crispy new denims and wools.  Lug the extra bag through the threshold and your tiny apartment doesn’t even seem quite as cramped and dusty as it did when you escaped home for the holiday.

And then it greets you: the Subway Stare.  Welcoming you back to the city.  It says: “Who the fuck are you? Wait, damn my ass itches.”  You love the city and it loves you back, tough love.  It says: “I hope you weren’t planning on looking for beauty in my cracks and crevices cuz all I got is some lint, baby.  Fuck I need a foot massage tho.”  It’s a collective stare, the glazed over look of a people all together, innocence lost, avoiding pointless eye contact, just waiting to get back to their lives, to the people who love them, trying to pretend they’re not underground with a lot of strangers, one of whom smells like pickles and toenails.

But what about society?  Aren’t we all in this together, goodness to

Search the cracks for booty. I mean beauty.

mankind, helping fellow citizens and all this?  What about tragic, quivering beauty in the places you least expect it, what about the kindness of strangers!???!  What about Anwar Fazal?  What about our cities are our future?

“Ooh in the future I should remember those Starbucks breakfast sandwiches make me ga-ssy.  They should put a bathroom on this.”

Blowtocol: “I Just Blue Myself”

TMZ and the Sun Times are reporting a Blue Man was arrested in a Chicago park performing felatio on a high school principle.  The most disturbing part of the story is not that a performance artist was caught acting with indiscretion or that high school principles principals are in fact, as we have thought all along, real gay, but that the arrest took place at 5:45 PM.  Now, I know daylight savings time means the sun’s setting around 4:30 in Chicago, but fellatin’ in a park before 6?  C’mon (so intended), that’s just poor form.  The world’s going to hell in a hand basket, no doubt, when you don’t even have time to grab something to eat (intended) before your BJ in the park.  It should be universally accepted that there are no phone calls to a LAN line after 10:00, and BJ’s only before noon, between 1:30 and 3:30 PM and 7:30 to midnight.

Lest We Regress: Kula Shaker – Tattva

If I knew anything about the Beattles I’d probably realize how horribly contrived this song actually is.  Fortunately, growing up Indian in the Midwest, the only music I was exposed to was Heartland Rock and Assamese folk songs.  As a result, a Brit Rock band getting all swirly about the Vedas was pretty innovative in my meager book.

As part of our continuing series of ’90s rock songs that totally fucked up our ability to appreciate music that wasn’t all atmosphere, angst and ambiance, we feature Kula Shaker’s biggest, and perhaps only, North America hit, Tattva.  According to the scholarly doctrine that informs all our understanding, Tattva is:

a Sanskrit word meaning ‘thatness’, ‘principle’, ‘reality’ or ‘truth’.[1] According to various Indian schools of philosophy, a tattva is an element or aspect of reality conceived as an aspect of deity. Although the number of tattvas varies depending on the philosophical school, together they are thought to form the basis of all our experience.

In other words…actually, I don’t know what that means, but I think it’s like if you just love your girl’s butt you still can still say, “I love you” and mean it.  Jinsa Veda Tattva.

Yo, the ‘sphere be on fire about these Bank of America subway ads talking all about Subway Transit Rebate like it’s something different than what the occasional crazy dude would do in the corner of the train with his fly surreptitiously open.

The general criticism seems to be Bank of America knows nothing about “New York City Livin'” and the ads are grossly out of touch.  I don’t know anything about that, but I’ll definitely admit the ads leave me scratching my head more than nodding in agreement.  Not in a bad way, they just make my dome itchy during this dry winter season.  Is there moisurizer for your scalp?  Is that what shampoo is or does shampoo just clean your hair?  What are you going to do about that pickle, BofA?

Thankfully conceptual internet art is here to save the world from corporate tommyrot and put the “camp” back in campaign, or something.  I’m still on Central Time, give me a break.  Internet Street Artist (yeah, get high and sit on that), Ruggles, got all ISA on these PSA’s and put together a collection of New York Subway Bank of America ads that may resonate more loudly with the average strap-hanger during this Good Depression when “Bank” is just another four letter word.

Lest We Regress: Local H

Yo, for real, what the FUP is up with this hardcore ’90s thing? Like, it’s cute and all and extremely comforting for anyone violently longing for a return to childhood when being in a band was as easy as calling John to see if his mom would bring him over to play In Bloom on some trash cans in the basement, but this past weekend’s Chicago Tribune listed on the cover of its Arts section as one of the most important Chicagoans of the year, Scott Lucas, frontman and one half of the Zion, IL band Local H.

Local H? In 2008? Don’t get me wrong, I wish nothing but the best for Local H, which was my favorite band for about 11 months in 7th grade, it just seems bizarre that a barely remembered remnant from the past decade continues to pull ink at all. I mean I love it; it’s part of the reason I continue to read the Chicago Tribune as often as possible even though it’s been 4 years since I’ve lived in the city. Like Local H on the front page of a paper my parents subscribe to however many years after I first saw their videos on MTV’s Friday night top 20 video countdown? That’s nutz out boy.

Anyway, the nostalgia whipped up by the article slowed my heart rate for a second before I started thinking about turning 26 in a few days, then that ticker started beating like a parakeet on three cups of Oslo all over again. I still remember hearing “Bound for the Floor” the first time. I was like 13, or something, sitting in my living room on a Friday night, looking out the front window for some friend’s parents’ car to pull up and take us to either the movies or Joey’s house where we’d listen to Bone Thugs and Poe in his basement before moshing repeatedly to Sabotage and Mother. Playing those 4 chords on the guitar still make my heart beat faster, no, wait, that’s the realization that I’ll never be able to play music again without knowing it won’t be with the prospect of some day doing it for thousands of sweaty people at the Eagle’s Ballroom.

Anyway, I digress like a history professor attempting to cover material outside the text book in order to make class attendance beneficial for the midterm. Local H, those first 2 records were sick. I hear Pack up the Cats (is that what it’s called?  Is that the 1st or 3rd disc?) is good, but I was already in high school by that time and too busy trying to fit in with the white kids trading Phish tapes in the hall. I still remember seeing Lucas and original drummer, the ripped Joe Daniels, opening for Stone Temple Pilots at the Mecca Auditorium in Milwaukee. Damn, those two dudes ripped it. Like 7 years later I saw the band play, after Daniels’ departure, randomly in the gym at college. A year or two after that I caught them opening for Broken Social Scene on some radio show bill at Schubas in Chicago. After the Social Scene set Lucas stumbled up to a few friends and me in the parking lot and asked where the bathroom was. All I wanted to say was, man, I used to carry a collage of you guys around under the plastic of my binder in middle school and my AOL screen name was Local1029 and everyone in the Teen Chat thought I was a UAW pedophile, but thankfully I realized how fruity that would sound and I instead pointed to some ally and kept my mouth shut.

Man, Local H. They’re not even back ’cause apparently they never left.