In just a few days Barack Obama will be sworn in as the 44th President of the United States. As President, Mr. Obama will inspire us to do more to help change the country for the better. Barack has said in order for real change to happen, each of us needs to make it happen. As our first commitment to change, we propose that every American planning on attending the Inauguration without a ticket pledge to make it a litter free event.

Many campaign events this fall ended with hours of clean up by volunteers and city workers. We should not have to rely solely on them on Inauguration Day to keep America’s front yard beautiful. By bringing a bag to the National Mall and picking up after ourselves, we can ensure a clean and socially responsible start to the Obama administration. Yes we can take responsibility for our actions! Yes we can change the World! Yes we can keep the National Mall litter free!

Please help us. We hope after reading this message you will:

1. Pass the message on to people and groups that you know plan on attending

2. Forward the video to your local newspaper, radio station or other media outlet

5. Create a YouTube video response to our PSA asking friends and neighbors to commit to a litter free Inauguration

Litter Free Inauguration was conceived by a group of young people inspired by Barack Obama’s message of change. Through a new media campaign including YouTube, blogs, Facebook, and email, this group hopes to spread this idea to all Inaugural attendees. Litter Free Inauguration is one simple idea and it is our hope that ideas like this one will be disseminated and acted upon on a regular basis during the Obama administration. This is a new era for civic participation and personal responsibility, and we hope this is just the beginning.

Make your Marx: Blogs, Trends and Who You Be

Blogs are two things at once.  They are fierce indicators of individuality – what blog do you read, what do you write on your blog – and they are tools of consumption.  We define ourselves based on You Tube videos (yo, this Hal Hartley flick is sick), music taste (yo, check out this classic Spearhead track), movie reviews (yo, this Hal Hartley flick is sick), and product sponsorships (Obama/Biden 08).  We yay or nay posts about our dearly beloved celebrities and snark attack an ideology other than our own.  It’s communication, baby, web 2.0, the twenty first fucking century.

I suppose the ultimate irony could be if, unlike Denny Green, we are not who(m) we thought we are.  If the changing geopolitical climate can provide the necessary confluence of circumstances to make the election of a black madras attending man with the middle name Hussein our President then what roles exactly do our own tastes and preferences play in our lives and consciousness?

Like a true Modern Jackass I pontificate above my pay grade.  I come home for the holidays, go through some old college text books, crib a quote from Marx and Engels out of context and surmise from it the course of human history.  But how can you not rock an academic double take when you’re brushing up on Josephine Donovan’s Feminist Theory and you reacquaint yourself with the concept of materialist determinism – one of those thought bombs professors dropped on you sophomore year during a discussion section you missed because you were too busy watching arbitrary VH1 countdowns in your apartment.  END_OF_DOCUMENT_TOKEN_TO_BE_REPLACED

Don’t Drink the Greater-ade: Obama, Slumdog and the Rise of the Rest

“For the last 20 years, America’s superpower status in every realm has been largely unchallenged—something that’s never happened before in history, at least since the Roman Empire dominated the known world 2,000 years ago. During this Pax Americana, the global economy has accelerated dramatically. And that expansion is the driver behind the third great power shift of the modern age—the rise of the rest.” – Fareed Zakaria, “The Post-American World”

When Fareed Zakaria spoke of the Rise of the Rest, he meant the economic booms of India, China and Brazil, BIC countries that once included Russia before the great bear of the North got all Putinitive on South Ossetia.  The American age of Pericles has come to an end, Zakaria argues, and a firm layer of rust has tarnished our shining city on a hill.

Nothing exemplifies the transition of America from life of the party to peripheral wall flower trying to get a dance with the beautiful mixed girl than 2 recent improbable rises to the top that are possible, ironically, only in America.  First, the election of Barack Obama as the 44th President of the United States.  Second, Slumdog Millionaire, a film about Indian orphans beating the odds,  has opened in wide release in the United States and ranked 8th on last week’s box office list.

Obama and Slumdog have more than just their stories of underdog triumph in common.  Their fans, their supporters, their Facebook friends endorse their objects of devotion with a shared blind fealty.  Jokes at the expense of uninformed Obama supporters travelled the cable spectrum from The Daily Show to Fox News.  Ask an Obama supporter for a specific reason why they voted for the President-Elect and most responses were vaguer than an AP English final essay.

Likewise for Slumdog Millionaire.  Express a less than favorable review of the film and die-hard fans will dismiss you, as liberals often do to those with ideas, as a “hater” or “contrary.”  Ask them, however, for specific reasons why they enjoyed the film and as with Obama supporters you will most likely hear one of two things: 1) Um, because…2) something they are regurgitating from an article in either the New Yorker, New York Times, Slate or whatever website provides the hot opinions du jour.

END_OF_DOCUMENT_TOKEN_TO_BE_REPLACED

On January 20th 2009, Barack Obama will be inaugarated as our nation’s 44th President.  It will be history in the making as 5 million people descend on the mall and watch in rapture for what may be the most inspiring moment in the past 45 years of American history.  A moment that will bend the knees of the strongest men and break the hearts of the hardest of humans.  It will, in short, be the greatest moment of your life.

Until 12 days later.  12 days later, on February 1 2009, Superbowel 43 will take place in Tampa.  On that day, the accomplishments of the junior Senator from Illinois who followed in the footsteps of Abraham Lincoln will seem bookish, boring and banal.  On that day something truly amazing could occur: Brett Favre could win the Superbowl, again.

END_OF_DOCUMENT_TOKEN_TO_BE_REPLACED

The strip of land on the southwestern edge of Lake Michigan was once the home of the Miami, Sauk, Fox, Ottawa, Ojibwa, and Potawatomi peoples.  The Potowatomi had established dominance over the land by the mid-18th century, which gave them a few decades to enjoy their status before white settlers started trickling in from the east.  The Europeans changed the land fundamentally and permanently (so far) when they made it an outpost for commerce and trade – also guns, railroads, bricks, and whiskey – but they couldn’t freeze the never-ending Rubik’s Cube of shifting populations endemic to it.  First English and French, then Germanic midwesterners, then Irish and Italian, then black, then Eastern European, then Hispanic and Asian.  Give or take.  Then they started mixing and moving.  Blacks in and whites out then whites in and blacks out. Mexicans west and Polish north.  Commingling Palestinians and Puerto Ricans.  Irish, static in the south.  Indians pushing Chinese and Vietnamese east into the lake.  And so Chicago sits on the southwestern edge of Lake Michigan, its people never quite finished.

Studs Terkel died on Halloween, four days before one of his fellow Chicagoans was elected president.  He was 96 when he died, and had just published his last book, P.S. Further Thoughts From a Lifetime of Listening.  You almost expect him to send us a P.P.S. from the afterlife, or wherever self-proclaimed agnostics go.  Agnostic.  Studs was never quite finished.

END_OF_DOCUMENT_TOKEN_TO_BE_REPLACED 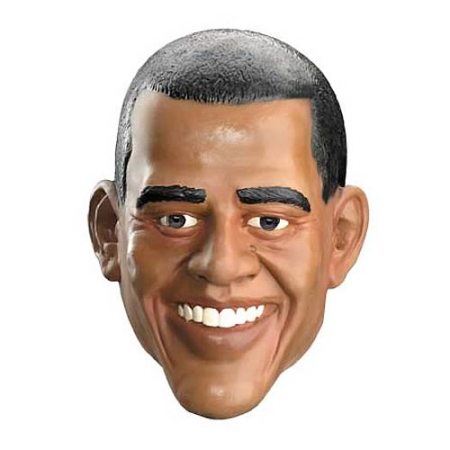 Will the sales of this mask determine our next president?

According to NFL statisticians, the outcome of the Washington Redskins’ last home game before a presidential election has correctly predicted the outcome of 18 of the last 19 elections (the one exception was the past election in 2004). According to legend, if the Redskins win their final home game In Washington before the vote, the incumbent party’s candidate will take the election. If they lose, the challenger wins. This formula means things are looking good for Senator Barack Obama, as the Skins got handily routed by the Pittsburgh Steelers last night. After the jump, some more examples of superstitious presidential predictors that have turned out to be, inexplicably, pretty darned accurate: